6 Reasons a New Roof Can Fail

6 Reasons a New Roof Can Fail

It rarely happens, but occasionally, brand new roofs fail. If yours has, you’ll want to know whose fault it is. Sometimes there was nothing the roofer could do to prevent the failure. Other times, the roofer made a major enough error in the installation that the roof fails immediately. It’s important to figure out what happened to your roof, so that you know how to fix it.Here are six common reasons that a new roof can fail.

If your new roof is made of asphalt shingles, then they have a sun-activated sealant on the back. While the nails that your roofer uses will keep the shingles on the roof to start, this sealant really secures them. The sealant does need time in the sun to activate, though. If very high winds come along before the sealant has activated, then the shingles may be blown off.

This roof failure might be the roofer’s fault—if they could have known the weather would interfere with the proper installation of the roof, then they should have waited. However, more often, this weather was unpredicted. Typically, roofers will return to these roofs and simply replace the shingles that were blown off.

That same sealant on the back of shingles can also cause a bit of a problem in colder climates where there are less sun and heat to activate it. Under certain conditions, the sealant will not activate at all. Those roofers that work in Alaska may have to manually seal the shingles to complete installation in a timely manner. This involves using a special tool to heat the shingles and activate the adhesive.

As with high winds, sometimes weather that is too cool or overcast for roofing in unpredictable, in which case your roofer should still fix the problem.

3. Failure to Include Underlayment

Without underlayment, a roof may fail very quickly. Not as quickly as with the two causes above. However, once a small leak develops, the roof will not have ice and water protector to prevent the water from penetrating the roof deck. This will make the leak more severe.

Without flashing, a roof may fail in the first few rains, though it may take longer depending on what flashing it is missing. Flashing are thin metal sheets that roofers wrap around chimneys, dormers, skylights, and many other roof features to protect them from rain. Without flashing, rain wil make its way into these crevices and become a leak.

When your roofer is placing nails, they need to hit the nail line, and not sink the nail in too much or leave it sticking out. If they fail to nail properly, the shingle can blow off early, or you may get leaks.

It is rare, but occasionally manufacturers do make mistakes that cause the early failure of the roof. Ideally, your roofer would notice anything unusual about your roofing materials before they put it on the roof, but sometimes these defects are impossible to predict. For example, if a manufacturer improperly stores the shingles, the sealant strip may activate in storage instead of when on the roof.

Whatever you suspect caused your early roof failure, seeking out another professional for a second opinion is a wise idea. 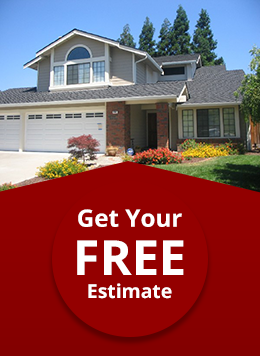